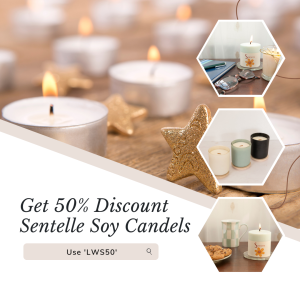 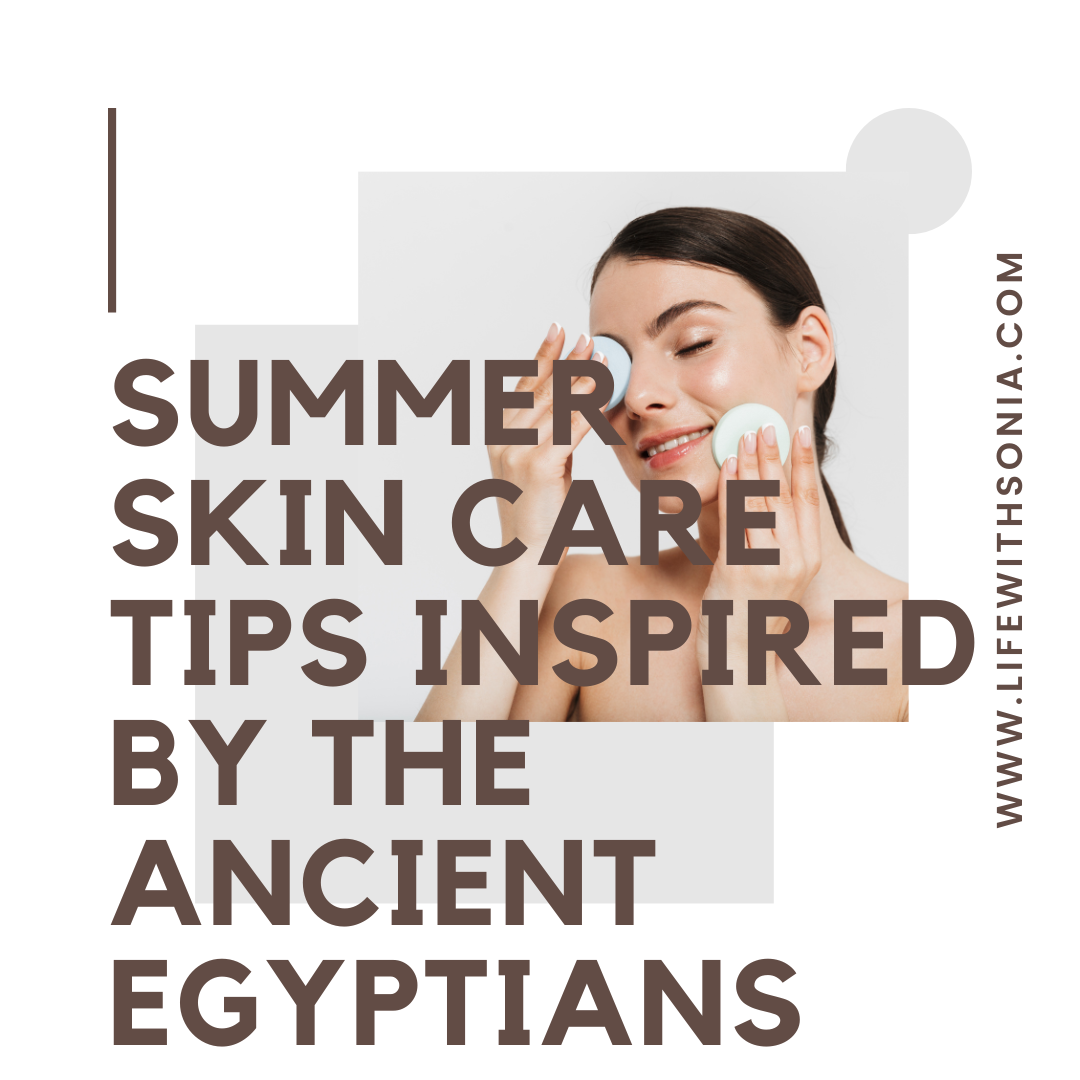 Summer Skin Care Tips Inspired By The Ancient Egyptians. Hello everyone, I hope you are well. In today’s post, I will be sharing a guest blog from beauty expert Randa Zaid of Hayaty Natural. Haytay Natural is a genderless skincare brand inspired by the wisdom of the ancient Egyptians. Randa will share six summer skincare tips, all inspired by the beauty rituals of the ancient Egyptians. This includes cleansing, exfoliating, hair removal, masks and moisturising, calming puffy eyes, feeding your skin from the inside, and using beauty oils.

Many of the skin care rituals we practice today are thought to have originated in Egypt more than 5,000 years ago. The ancient Egyptians were obsessed with health and beauty, but their simple, holistic routine is just as fitting for the environmentally conscious 21st Century.

Pictures of washing rituals have been revealed on hundreds of artefacts found in excavations over the years. Ancient papyrus papers show the Egyptians relied heavily on plants and herbs for skin care.

Ebers—one of the oldest and most important medical and herbal papyri of ancient Egypt—refers to the aloe vera plant as a ‘plant of immortality.

And the Edwin Smith Papyrus seems to have recorded the forerunner for a facelift with a recipe for ‘transforming a man to a youth‘ with a chemical compound extracted from bitter almonds to make skin tighter and more rejuvenated.

Cleanse, treat, moisturise was the ancient Egyptian mantra, so the basic principle hasn’t changed, although these days, we might not be keen on soaking in tubs of donkey milk.

But there is plenty we can learn from these ancient experts, so here are a few summer skin care tips from those clever ancient Egyptians who knew a lot about protecting their skin from the ravages of the sun:

Egyptian queens Cleopatra and Nefertiti were known for their love of milk and honey baths, and the combination does make a great cleanser, leaving the skin soft and silky. However, that’s not practical or environmentally sound in today’s world. You could use a substitute like coconut milk mixed with warm water but better still, check out cleansing products containing hydroxy and lactic acid. Milk is rich in lactic acid and listed in many skin care products (AHA). It helps remove dead skin cells and stimulates new cell growth.

Olive oil was also a favourite of the ancient Egyptians, who spread it all over their skin to stick to the dirt before scraping it off. The Ebers Papyrus instructed people to mix animal and vegetable oils with alkaline salts for washing. The olive oil soap we buy today is known for its lower pH than mainstream soaps that can dry and irritate the skin. It’s deeply nourishing, moisturising and antioxidant-rich. A very gentle cleanser that can be used on the face without stripping out its natural oils. 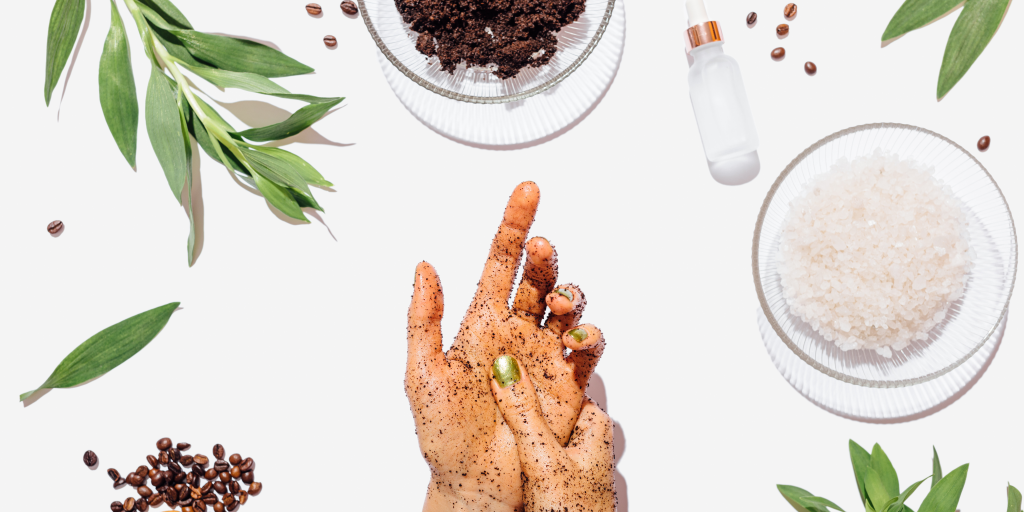 Credited with the first exfoliation techniques, the Egyptians used a combination of pumice stones and scrubs made from sand or plants such as aloe vera. Natron (sodium carbonate) mixed with water was used as a scrub. A gentle substitute for Natron is modern baking soda. It’s a mild exfoliator but shouldn’t be done more than once a week.

You could also try many of the mineral sea salt scrubs on the market or look out for an excellent Egyptian organic loofah. It’s not too hard or soft, the perfect texture for a good scrub. Be warned, it has an earthy, muddy smell, but you get used to it and those who use them for the first time say they feel like they have never showered before. Men sell them with carts on the street all over Egypt, but they are just as easily found online or in good, organic health shops.

Summer is the time for exposing our bodies, and one of the first things on the self-care list is a good de-fuzz of our winter coat. The ancient Egyptians invented the natural method of hair removal, sugaring. Being hairless was the gold standard of cleanliness as they had no access to hygiene products such as deodorants. So, living in the soaring temperatures of the hot desert made hair removal a must for comfort. Alexander the Great always charged into battle clean-shaven and hairless.

The ancient Egyptians made their paste out of balls of a honey mixture (moum). Sugaring has gained popularity over the world in recent years. It’s better for the environment and less painful than waxing as it binds directly to the hair, not the skin. Some Egyptian women today still use sugar and lime juice instead of honey.

The nourishing effects of aloe vera were documented in the Eber Papyrus as far back as 1550 BC. But its reference as the ‘plant of immortality was not because it makes you live forever, but its multiple uses. Cleopatra and Nefertiti were believed to have used it on their faces as a nourishing and tightening mask.

The plant has more than 75 nutrients, including Vitamins A, C and E and B12 and amino acids. As well as being anti-inflammatory, it is super hydrating, reduces swelling, stimulates collagen production and increases the healing rate, especially after sunburn. The Egyptians depicted the plant all over their temple walls.

There are myriad products on the market containing aloe vera, but the simplest thing is to get a plant from any garden centre, cut open the leaf, scoop out the sticky gel inside and apply it to the face. Rinse off with warm water after around 10 minutes for firm, smooth and beautifully moisturised skin. Alternatively, Shea butter was a big part of ancient Egyptian civilisation for dehydrated skin. Anthropologists discovered it was the go-to for skin disease. It contains enormous amounts of fatty acids to moisturise, soothe, and protect against short waves of blue light.

Dark circles and puffy eyes are not a modern phenomenon. The ancient Egyptians used slices of nutrient-rich avocado under their eyes. They believed avocados were the food of the gods. Rich in potassium, vitamins, fats and protein, whether you slap it on your skin or eat it, the avocado is the health supplement that does grow on trees.

Feed Your Skin From The Inside

The ancient Egyptians firmly believed that if you eat well, you look well. Hieroglyphics on ancient Egyptian walls left behind a record of what they ate and drank. Beekeeping began there as early as 2400 BC. They loved their honey.

In 450 BC, the Greek historian Herodotus wrote that ‘Egypt was a gift of the Nile.’ When this great river used to burst its banks annually, the receding waters left a black, fertile mud rich in minerals. An abundance of pomegranate, dates, grapes, watermelon, garlic, cucumbers, carrots, celery and peas grew, as did dates. With a diet like that, the ancient Egyptians fed their bodies and skin with a rich source of antioxidants, protein and fibre. 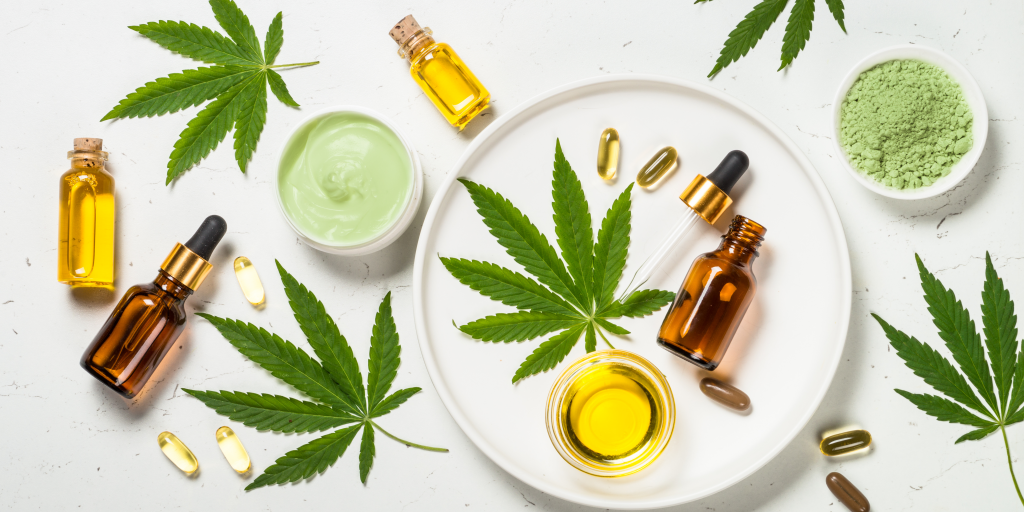 Soaking up the summer sun can leave skin parched. The ancient Egyptians (who had access to more than 20 essential oils, according to the Ebers Papyrus) slathered themselves in aromatic oils to keep their skin from drying out in the fierce desert heat. Frankincense, cedar, lupin, black seed, rose, fenugreek and sesame can all be bought individually and added to a carrier massage oil such as sweet almond or look for the ingredients on commercial moisturising oils.

One of the seven sacred oils was displayed in the Museum of Cairo. This was central to worship the gods and was burned to rid the air of bacteria. Historically used for scars, the Ebers Papyrus notes its ‘superior wound healing effects and its powerful antioxidants are believed to slow down the ageing process, especially on mature skins – so look out for it as an ingredient when buying night repair creams. It also smells fantastic.

The first oil was recorded in ancient Egypt, which was used to protect against sunburn. Rich in antioxidants, it promotes elasticity, nourishes, hydrates and illuminates. Look out for this ingredient in your skincare products, as it will give your skin a wonderful glow.

Nutrient-dense and anti-inflammatory. They were used in ancient Egypt to treat bites and rashes. It can also help to clear eczema, acne and psoriasis. Archaeologists point to its great significance for protection and healing after finding the seeds in Tutankhamun’s tomb. This wonder seed is so versatile and has so many benefits that it should be a ‘must-have in any skincare product you choose.

Listed in the Ebers Papyrus as Sesemt, baskets of sesame were found in King Tutankhamun’s tomb. It was used to treat inflammation, and today its anti-microbial properties are used for fighting acne.

One of Cleopatra’s favourites. Slows the signs of ageing.

This flower was essential to the ancient Egyptians as they believed it had powerful healing and aphrodisiac properties. They would boil down roses to use as a skin balm. It was the symbol of the Egyptian Goddess of Love, Isis, and was depicted in many works of ancient Egyptian art. It’s a great skin moisturiser, and the scent reduces anxiety. 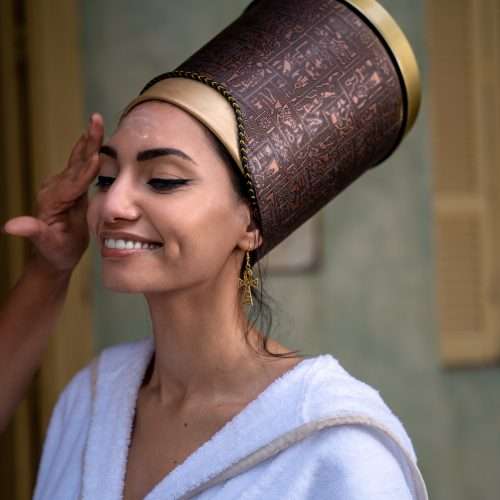 Randa Zaid is the founder of Hayaty Natural, a genderless skincare brand inspired by the wisdom of the ancient Egyptians. Using medicinal botanicals like Black Seed (so beloved by the Ancient Egyptians that they called it the ‘blessed seed’) and a combination of plant-based ingredients sourced from local communities in Randa’s homelands of Egypt and Italy, each formulation follows ancient recipes developed by the Pharaohs to provide a holistic approach to self-care. Hayaty is Organic, Vegan, Fairtrade, Cruelty- and GMO-free. Packaged in recyclable glass and card, each bottle comes with a hand-made Egyptian papyrus to inspire us to love ourselves and our environment. https://hayatynatural.uk.

How to Set Correct Goals for You 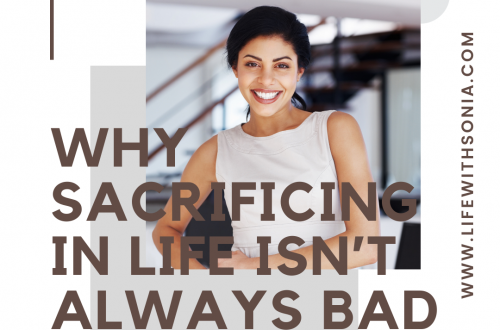 Why Sacrificing In Life Isn’t Always Bad For You 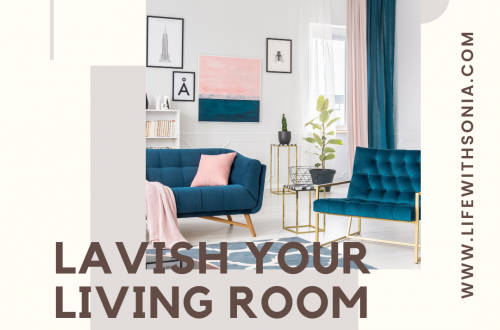 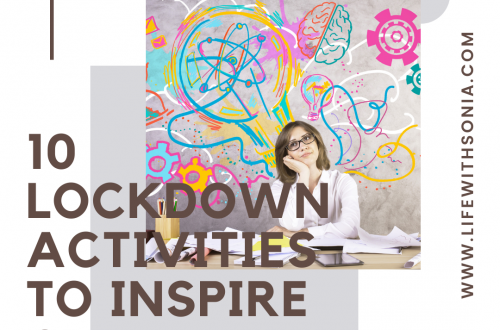 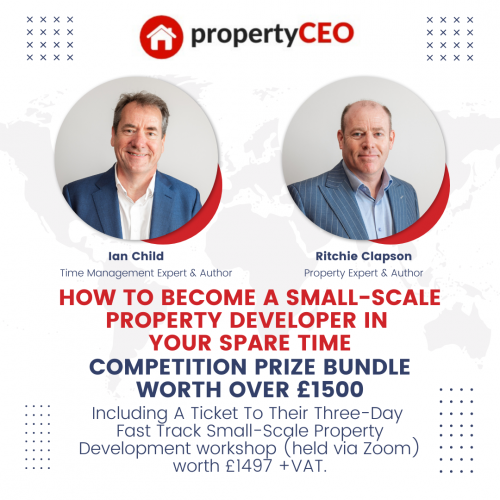 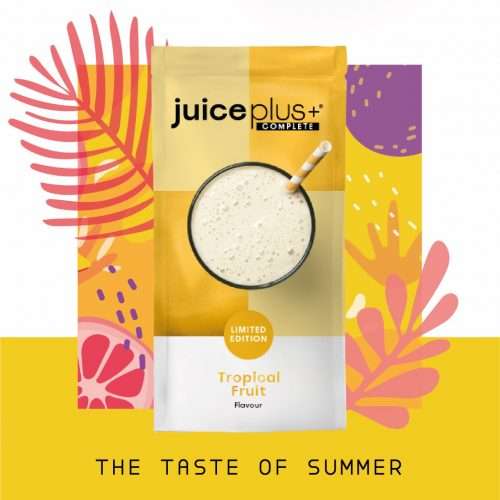 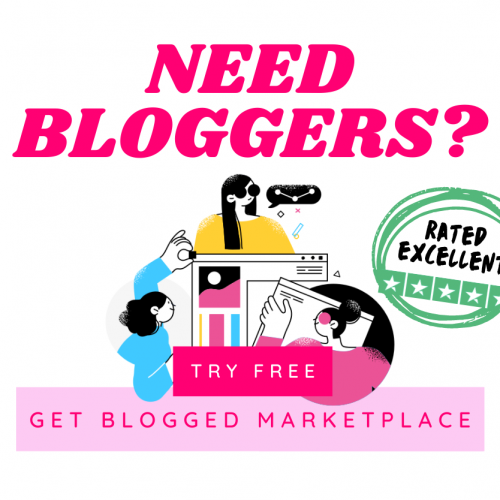 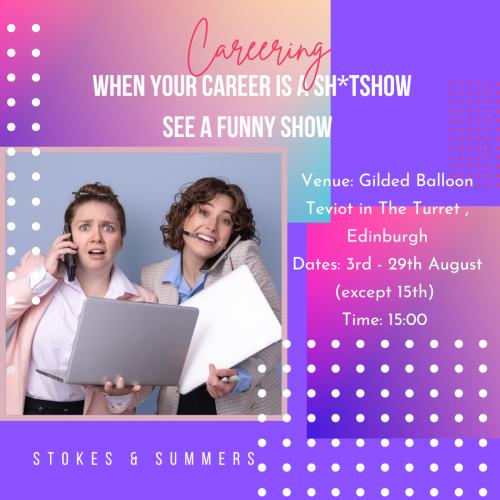 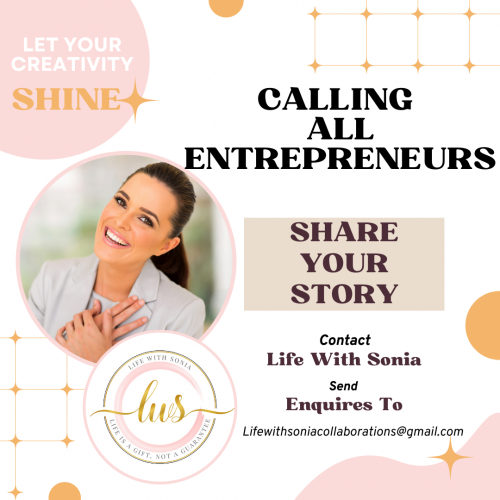 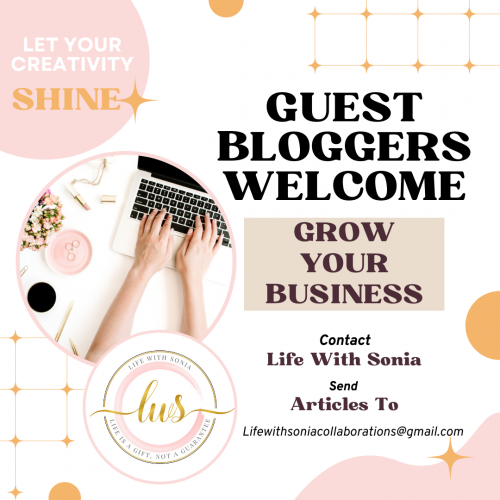